We completed 20 years of car washing; having washed 8380 cars.

We wash on the 3rd Saturday of every month except January and sometimes April if Amma is touring Australia and it coincides with our car wash.

One morning in 2005, while we were attending Amma’s program in Albuquerque, New Mexico, a guy heartily clapped me on the back and asked where we lived. Upon learning that it was Adelaide, he immediately observed, “Oh, you must wash cars!” His comment not only was surprising, but to tell the truth, a little embarrassing. Amma is always working on our egos. 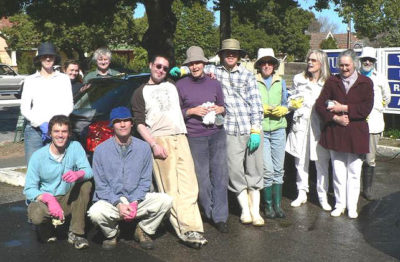 Getting up early on a Saturday morning, when faced with the prospect of washing thirty cars or more, is not so easy. Between ten and fifteen members of the Adelaide Amma Group regularly do just that. It is hot in the summer and cold in winter. Sometimes there is a long queue of cars and oversized four-wheel drives that continues to grow…. for hours. The nozzle of the hose is leaky, and you get wet. Washing cars for several hours, one after the other — spraying first, then soaping and washing thoroughly, body and hubcaps too, rinsing, and finally wiping dry with a chamois, and oh yes, the windows inside and outside are polished until they shine — is hard work. A less than honourable voice in the back of the mind has been reminding me all w eek: “Car wash on Saturday.”

And it is never as bad as the imagination threatens. In fact, it is often fun. Our daughter, when she accompanies my wife and me, often says so. For the Adelaide Amma Group it becomes a social occasion where news is exchanged and we get to know one another better. Amma says that the dharma of the Kali Yuga is cooperative action, and dharma brings us closer to Amma. Amma also says that her children should do seva (selfless service) to purify the mind for meditation. How many hours of meditation can we do with real concentration? The logic of concentrating on doing a good job on a really dirty car becomes more and more persuasive.

The Adelaide Amma Group began washing cars to raise funds for Amma’s humanitarian activities in 1999. Since then many regular customers have brought their cars back, month after month, to take advantage of what is, after all, the best deal in town. One regular is in the habit of providing snacks for the devotees, another donates the litres of liquid soap that keeps the buckets bubbling. Sometimes customers, after finding out about Amma’s charitable works, spontaneously make donations. Year after year, the automotive repair business where one of the two monthly car washes is held, has donated its premises, and the water too. (Every other two weeks, we wash the retirees’ cars at a local retirement village.)

On average, Amma’s charities receive five hundred dollars a month as a result of the car wash seva. Over the years tens of thousands of dollars have been raised. But that is not the bottom line at all. The truth is that it is a blessing to be able to serve in this fashion. The mind may oscillate between gloom and glee, but at the car wash we feel that Amma’s grace is always showering down on us. All we have to do is keep our buckets upright!

Get latest news & updates from Amma Adelaide in your Inbox.