Honouring her contributions to the effort of spreading world peace and harmony, Amma is regularly invited by international organisations to address the issues of religious differences, the environment, thedelete education, and peace-making. In 1995 her address was a highlight of the Interfaith Celebrations at the United Nations 50th Anniversary in New York. In 2000 Amma led the United Nations Millennium World Peace Summit giving her vision for the millennium.

And in 2002, she was presented with the Gandhi-King Award for Non-violence, at the UN headquarters in Geneva, where she also gave the keynote address at the Global Peace Initiative of Women and Religious Leaders. In 2004 she addressed Parliament of World’s religions held in Barcelona. 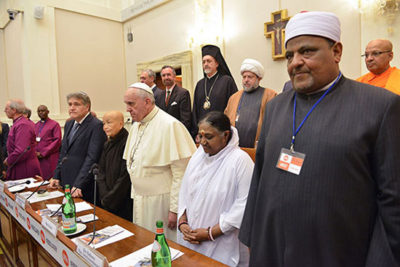 In 2012 she addressed the UNAOC (United Nations Alliance of Civilizations) in Shanghai and in 2014 Amma joined Pope Francis in the Vatican and 10 other world religious leaders in signing of a declaration against human trafficking and slavery.

Amma’s teachings are timeless and universal, while conveyed in a way that makes them accessible to all – regardless of their religious, education or cultural background. Amma has never asked anyone to change their religion, only to go deeper into their values or faith, and to live by those essential principles.